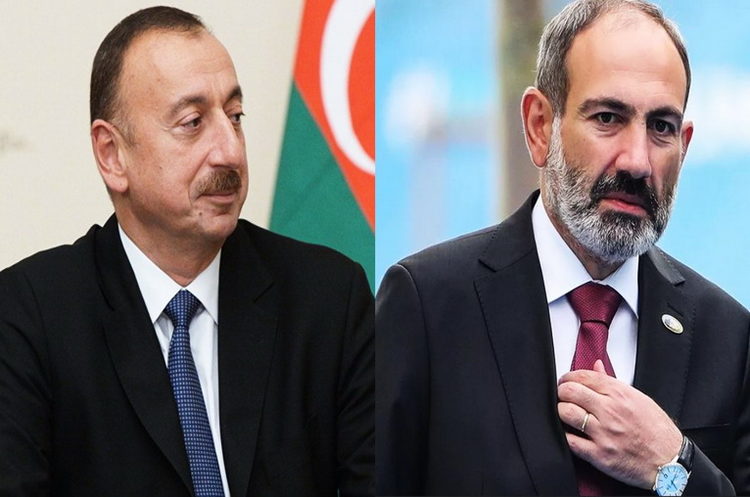 In the light of the scheduled meeting of the Aliyev-Pashinyan meeting in Vienna, the CIACR-South Caucasus presents an interview with Alexei Sinitsyn, chief expert of the American-Azerbaijan Foundation for the Advancement of Progress

Officially, Yerevan, in the light of the OSCE MG activation, states that "we are not going to return the occupied areas that this issue is not at all on the agenda of the talks on Karabakh". Plus, he stubbornly tries to put the separatist Nagorno-Karabakh regime at the negotiating table. What, in principle, happens with the negotiation process?

After coming to power in Yerevan, the new team of Nikol Pashinyan was supposed to represent the world, i.e. the main political players, their new foreign policy agenda. Of course, it also includes the problem of the Karabakh settlement.

For a while, N.Pashinyan and his team were quite confident in themselves, because they hoped for the protection of the US State Department. It was then headed by Rex Tillerson who did not consider the captured areas of Azerbaijan as a "buffer zone" or a strategic "security belt" created by the Armenian occupation forces around Karabakh.

Tillerson did not want to spoil relations with the Congress, in which the Armenian lobby has rather powerful positions. One of his leaders, Adam Schiff, California's Democratic congressional congressman, grappled with President Trump's deadly gesture and even now promises to impeach him.

I think, therefore, Tillerson agreed with the so-called "Step-by-step settlement" of the Karabakh problem in the light of false interpretations of the resolutions on the Vienna and St. Petersburg meeting of the Presidents of Armenia and Azerbaijan. He promoted the so-called "Measures of confidence", which meant "the placement of tracking mechanisms that determine violators of the ceasefire regime" on the line of contact of the conflicting parties in Karabakh. In Armenia even talked about the actual recognition of the "Artsakh-Azeri border", and the notorious "confidence measures", which could not even be realized physically, have been declared a precondition for the resumption of negotiations.

But now foreign policy of the United States is being addressed by John Bolton, an advisor to President Trump's National Security Council, whose ideas Secretary of State Mike Pompeo seems to only duplicate. After the meeting with Pashinyan, the advisor urged the relations with Armenia to be a priority for the United States. But, it seems, Bolton, without noticing himself, provided a bear service to Yerevan. In the context of his vision of Russia's isolation, he made an unexpected statement: "Reduce extraneous externalities (according to Bolton, this is Russian - AS.) The impact on Armenia is to reach an agreement on Nagorno-Karabakh. "

So an offer appeared, which is now called "Bolton's plan." Its essence is in the interpretation of the press - in the first stage, Armenia should release six of the seven occupied regions of Azerbaijan, and on the second - Karabakh refugees should return to their places of permanent residence.

However, Bolton's plan coincided with exactly the same "Lavrov Plan" and even strengthened the position of the co-chairs of the OSCE Minsk Group. Thus, N.Pashinyan was essentially faced with the fact: Armenia, at least, should begin to discuss in detail with Azerbaijan the plans for the withdrawal of occupational Armenian troops from the "buffer zone".

Negotiations on Karabakh are being conducted with the participation of Azerbaijan and Armenia under the chairmanship of the OSCE Minsk Group for more than 20 years. Why exactly today there was an initiative of Yerevan to change the format of negotiations?

A map called "participation of Karabakh Armenians in talks" is perhaps the only argument with which Nikol Pashinyan intends, if not to torpedo, to delay the Karabakh settlement itself for a long time. The logic of the Armenian prime minister is simple - he can not represent the Karabakh Armenians in negotiations with Azerbaijan, because they did not elect him as their leader. As the Foreign Minister of Armenia Zograb Mnatsakanyan explained, "In the end, the problem concerns Nagorno-Karabakh, which is a formed political unit, has an institutional system for expressing the will and approaches of its population, has an elected authority, and this system is recognized by the international community in various documents ".

However, what is the formula for such a "political unit", even though not one state of the world, including Armenia itself, did not recognize Karabakh separatists? Further, the statement that the "political unit" of the separatists is "recognized by the international community in various documents". Where are these documents? Who signed them?

Both N.Pashinyan and his entourage have repeatedly said that Armenia is the only guarantor of the security of Karabakh. But then, Karabakh, on whose territory the occupation army is located, is not even theoretically a state, since deprived of a state inherent in political subjectivity. He also does not possess the "Institutional system for expressing the will of the population", which the Armenian minister mentioned.

Otherwise, how Robert Kocharian could have been in 1994-1997. to be the president of the Nagorno Karabakh Republic, and since March 1998 of the year - two terms of the president of Armenia? There is no law on dual citizenship in Armenia. So, the election of Kocharian by the president or the appointment of Karabakh's native Serzh Sargsyan as the Armenian Defense Minister in 1993 year could only take place because Armenia does not consider the "republic" of the Karabakh separatists an independent state.

Then what kind of mandate should Nikol Pashinyan negotiate with the Azerbaijani leader issue, but did not leave the Karabakh Armenians? By the way, according to Kocharian's personal decision, the so-called NKR was excluded from the negotiations on Karabakh. According to the former head of the Armenian Foreign Ministry, Alexander Arzumanyan, many, including former Co-Chairmen Matthew Bryza and Bernard Fassier, can confirm this fact.

If Yerevan will continue to insist on joining the so-called NKR to the negotiations, what, in your opinion, should Azerbaijan do?

In my opinion, the offer limit is completely exhausted. In the days of President Obama, former American co-chair James Worlick unsuccessfully tried to sack the Karabakh separatists at the negotiating table. Now the international mediators from the Minsk Group are ready to change the format of negotiations only with the consent of the parties. The European Commissioner for Enlargement and Neighborhood Policy, Johannes Khan, in turn, noted that "it is necessary to leave everything in the current format, not to create anything new." No significant political figures in the world support the position of the Armenian side. Naturally, Baku categorically opposed the inclusion of Armenian "Karabakh" in the negotiation process.

But nevertheless, certain progress nevertheless managed to achieve. Zohrab Mnatsakyan stated: "The issue of involving Artsakh in the negotiation process is essential and important, but not a prerequisite. This is not a precondition, we want to continue and find a solution to this problem. "

If Baku is now abandoning the negotiations, then Yerevan will begin to trumpet the whole of the world about the "lack of capacity" of the Azerbaijani Republic, because the Azerbaijani side did not want to discuss even the general agenda of negotiations. I do not think that such an occasion should be given to N.Pashinyan's administration.

In such a case, the impression may be that Armenia deliberately pushes Azerbaijan to a new escalation ... What is fraught with this for the region?

The situation can be aggravated at any moment. But, it seems to me that the Armenian side does not calculate the risks, ignores reality, both in political and in military format. The Armenian establishment pursues a policy that its creators, the Anglo-Saxons, call "post-truth politics", i.e. "Politics of the past". This type of political culture always appeals to emotions, it is inherent in the repetition of the same argumentation and, as I have already said, the rejection of objective reality.

The worst thing is that the guide of such a policy itself becomes a victim of this post-truth. Now in the Armenian mass media it is seriously asserted that "the Armenian army is ready to become the guarantor of negotiations". In other words, the Armenians are ready to "compel Azerbaijan to peace". This can not be taken seriously ...

But in Yerevan, an "operative meeting of the command staff of two (!) Armies of two (!) Armenian states" is arranged, and the military minister, David Tonoyan, does not rule out a serious revision of the military doctrine. The founder of the Armenian Institute for Security and International Affairs, Styopa Safaryan, said that Armenia "is guided by the concept of strategic defense, which is a combination of defense and counter-attack."

It is only a question of readiness for a "counterattack"? But in February 2016, the same David Tonoyan at the OSCE seminar in Vienna presented the Armenian military concept as a "Containment / Restraint System", which implied a pre-emptive strike on Azerbaijan. And whom did the Armenians control in April of the same year?

Now, of course, the appetites of Yerevan are more modest - from preventive blows have come down to a counterattack. Already there were talks about the possibility of purchasing weapons in the US (ostensibly Bolton was promised to Yerevan). In Moscow, Armenia intends to acquire 4, as mentioned earlier, and 12 Russian fighters Su-30СМ, etc. At the same time, no one in Armenia is wondering where to take a billion or more dollars for these purchases.

Do you think the Armenian and Azerbaijani society is ready for peace?

The fact that the Azerbaijani society is ready for peace after the restoration of the territorial integrity of Azerbaijan is clear to everyone. Moreover, Baku guarantees to provide the widest possibilities of self-determination of Armenians within the Azerbaijani state.

In my opinion, the Armenian society, like the authorities, is not ready for peace. Inside the country, the pro-Western parties, including the Movement "My Step", created by N.Pashinyan, categorically deny even the very possibility of eliminating the "belt of security." Moreover, the authorities plan massive occupation of the occupied territories along the shores of Araks. Which of the Syrian Armenians, or even more surprisingly, the returnees will want to settle on the "powder barrel" - this is not much worry in Yerevan.

The irreconcilable radical nationalists from the newly-formed party of the "Sasna Cher" organization, which have already demanded the return to the idea of ​​"Miatsuma", ie the entry of Karabakh into Armenia. Oppositional Republicans, too, are now acting out militarily. For them it is a matter of political survival, since The pro-government media has already accused them of "surrendering territory to the enemy."

You can, of course, call Nikol Pashinyan an adventurer. But he is also objectively a hostage of militant sentiments in the Armenian society and the Armenian diaspora, which the idea of ​​"great Armenia" does not leave behind.

Therefore, I have no joyful expectations regarding the peaceful resolution of the Karabakh settlement.

The power script for solving this problem is much more realistic ...