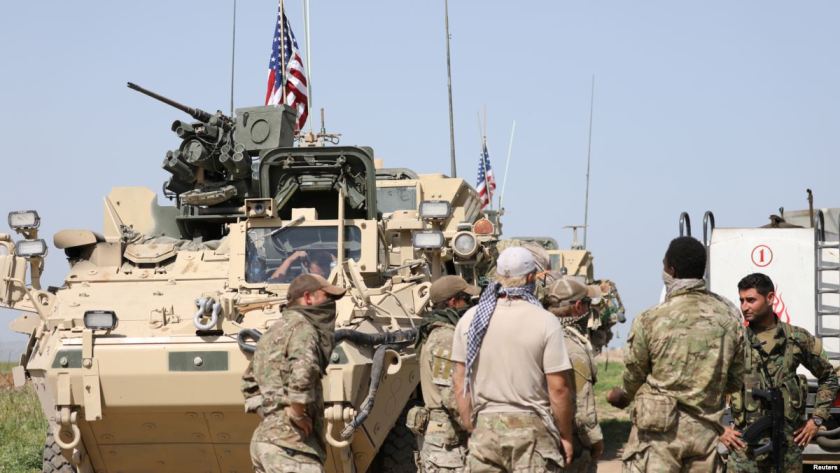 The head of the Central Military Command of the United States, Joseph Wothel, said that "the withdrawal of the US military contingent from Syria will depend on the operational situation, but may take place in the coming weeks." Should I expect to leave or is it another diplomatic maneuver? Washington, meanwhile, can not help but realize that the entire Syrian "cake" will go to Russia, Iran and Turkey ...

Let's start with the fact that the "Syrian cake", as you put it, is far from a gift and not a prize, it's not a rosette on cream cream, but quite another ... substance, so to say. In a word, headaches and new problems from a kind of "gift" are an order of magnitude higher than some kind of joy. Especially if you consider the costs that are needed by the "triumphant" in order to maintain at least a relative order in Syria. Not to mention the reconstruction of the country.

The fact that the Americans will leave Syria in accordance with the plan approved by Trump is quite obvious. Since they will physically disappear, they will remain in control of the situation, and if necessary, and adjusting it to the right side for them. And the possibilities are very serious - from the military, to the economic ones. The US presence in Iraq and in the rest of the Middle East bases is fully preserved, the international "anti-terrorist" coalition remains. That is, even leaving Syria, the US can rapidly mobilize and resume its presence there, if something goes against their ideas about the future of this country or about the foreign policy orientation of the regime.

There is another serious point. The United States can at any time impose harsh sanctions on companies that have decided to cooperate with Damascus in rebuilding the part of Syria that it controls. Well, and then how to maintain stability? The winner in the civil war on the ruins of his own country is a very sad sight ...

In your opinion, according to what scenario will the events in Syria develop if Americans stay in this region? How will this affect the distribution of forces in Syria?

In the United States, there is no special need to maintain any significant presence in Syria. Moreover, it is fraught with certain risks that Trump seeks to avoid.

Say more - Syria for Make America Great Again is a burden and a hindrance. Let the other problems raze other external system players - Iran, Turkey, Russia, someone else. Let them bear this burden and conflict with each other - and without it will not do. And the United States seeks to preserve in this situation, as in a number of other cases, the role of Supreme Arbitrator. Which, of course, is more profitable and more profitable on all sides.

According to a number of media reports, lately there have been clashes between Syria and Russian (pro-Russian) and pro-Iranian (Shiite) forces in Syria. Obstacles to the movement of Russian forces, the installation of a checkpoint, and arrests of several hundred activists of the proshidi units were noted. What did not you share?

In fact, the tension between pro-Russian and pro-Russian-oriented Syrians has long existed. And with time, like a decent cognac, it only grows and is saturated with new shades.

Moscow is not delighted with the desire of Tehran to consolidate its presence in Syria. Moreover, the Iranians are seriously suspected of the desire to de facto make that part of the country controlled by Assad, another province of Iran. That, of course, will create additional threats to the security of Israel, to which Moscow relates trembling.

The Iranians, however, believe that the Russians are playing a double game with them, they want to put Assad under their control in the political and economic terms, and so on ... The list of Tehran's claims to Moscow is quite extensive, and far from all this list is fictitious.

In a word, everything is predictable enough. The myth about the "Ankara-Moscow-Tehran axis" created by propaganda, as it usually happens, was dispelled when faced with realities. And quickly enough it turned out that there is no union or alliance here, and so - partnership to the first alley. The strategic tasks that each of the parties seeks to resolve in Syria is too different.

In the light of the US withdrawal from Syria, are Turkey facing clashes between the protuberian and pro-Russian forces in the region?

By the way, Ankara, like Tehran, has a clear vision of those strategic tasks that it must solve on the basis of the Syrian conflict. First and foremost, this is a "security zone" along the Syrian-Turkish border, eliminating the threats posed by part of the Kurdish groups, arranging and returning to the normal life of those areas of Syria that were under the control of Ankara and the Syrian military-political forces oriented on it.

That is to say, Erdogan has, frankly, a list of wishes for Syria, each item of which is for Ankara as a matter of principle. And, accordingly, they will stand up to the Turkish side with the greatest persistence, without any difference, before Moscow or Washington.

If these principles are to be defended, they will have to go through a scandal or a conflict with Trump or Putin - and Erdogan and Turkey's political leadership will have enough political will and resolve - no external player here should have any illusions. This will and determination of Ankara and the Turkish society have already been shown repeatedly, without fear of possible political or economic costs.

This does not mean, of course, that Turkey is right and wants a conflict - quite the opposite. But if necessary, it will act decisively and firmly.

How will the withdrawal of US troops from Syria affect the region of the South Caucasus?

I do not see direct communication here. Syria, especially now, is a rather local situation that has nothing to do with the South Caucasus ...

Let me answer the question - for example, in the daily conversations of the inhabitants of Baku, the Syrian theme is often present? I suspect that if it is said about it, it's only in rather narrow circles. As the situation in Syria and the South Caucasus problem, I repeat, are practically in no way connected with each other and cause only purely academic interest.

... And at the same time, the humanitarian mission from Armenia began work in Syria in the Aleppo district. Communication can appear? Why is it to Yerevan?

Certainly, Moscow was asked about it. And in Yerevan, it was unequivocally believed that such a demonstration would emphasize the loyalty of the new leadership of Armenia to Russia.

But, in other words, it's all about the relations between Moscow and Yerevan, not about Syria. The gesture is absolutely declarative and has no practical meaning. Moreover, I suspect that Washington was not expecting Washington's so sharp reaction to this innocent step from their point of view.

It is true that the "cold shower" in the form of a statement by the US Embassy in Armenia that the demonstrated loyalty in Moscow in the form of delegating a humanitarian mission to Syria is, frankly, a "storm in a glass of water", an attempt to lean against "adult games." From Yerevan, this looks, perhaps, and somewhat ambitious, a little bit of dignity, but in reality, I repeat, this initiative has no practical meaning.

Is it worth to expect the US to leave Afghanistan after Syria - the topic is also actively mussy? How will it affect different regions, projects, in particular, in the South Caucasus?

Leaving Afghanistan will only be possible after reaching an agreement between Kabul and the Taliban. Well, of course, after the Americans receive certain guarantees from both - starting from the fact that they will not begin to enthusiastically cut each other after the departure of a foreign contingent, they will engage in economic construction and unite efforts to clear the country from the Yugilovites and their sympathizers.

So far, these agreements have been reached - from Kabul to Washington on skiing. There is a movement - the result is not visible.

Indeed, Americans are interested in retiring from Afghanistan and are actively working on the political support of this process. But most experts are right - all this is incredibly difficult, here there are a lot of problems, which sometimes sometimes do not quite understand how to approach.

So let us get patience, let's look at the dynamics, hope that Uzbekistan's initiatives will play a positive role in terms of providing a platform for talks between the Taliban and the Afghan authorities. Let's see how Tashkent will deal with the role of moderator in this matter. And not only the moderator - Tashkent is a very interesting and concrete initiative to engage the Taliban in real economic processes, which can create preconditions for infiltration into the political system ...

This is all that so far can be said about this situation.

Bucharest: Everything Goes to Early Elections?