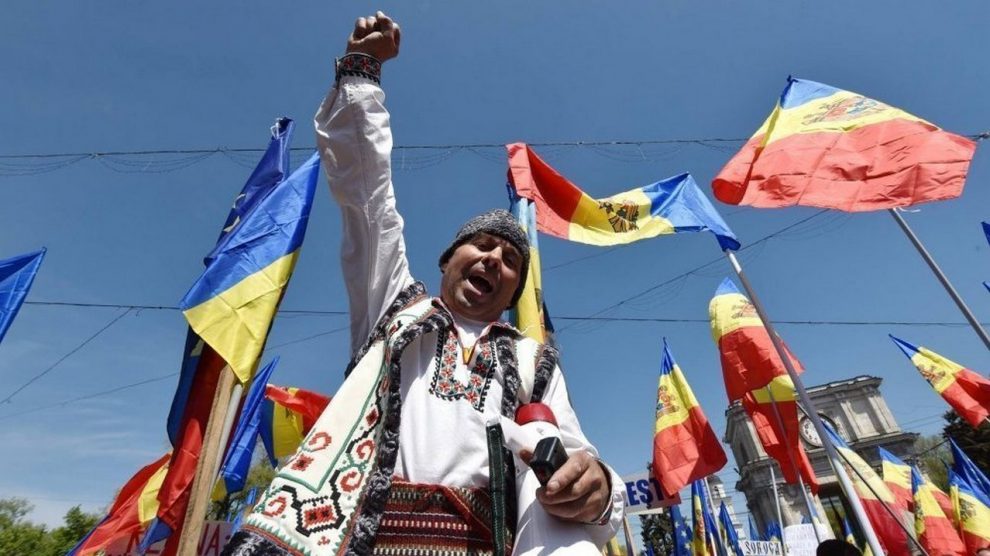 26-27 August 2018 in Chisinau was hot, both through the weather and political upheavals
If you look at the events that took place in the Republic of Moldova at the end of August this year, then they would seem to be a real surreal citizen. That is why, in order to get some idea of ​​the recent events in the capital of the country - Chisinau, this should be somewhat understandable.

Protest with difficulty
26 August 2018 of the year - on the eve of the celebration of the Independence Day of the Republic of Moldova, a protest action of opposition pro-European parties "Action and Solidarity" by Andrei Nestase, "Maid Sando" and "Liberty Democratic Party" Viorela Chebotaru (" united in July 2018 in the Acum National Resistance Movement ("Now.") The event was announced in the middle of summer and its main goal was to draw public attention both in the middle of the country and abroad to the problems in Moldova - the seizure of power by the oligarch Khom a leader of the Democratic Party, Vladimir Plakhotnyuk, corruption, the theft of the billion, as well as impoverishment and emigration of the population of the country. Oil to the protest movement's 26 August triggered the fact that the Supreme Court of Moldova in July 2018 declared the election of the Mayor of Chisinau, where Andrii Nastas won, not valid.

However, the event, which had to grow into a large-scale campaign of disobedience in the absence of a reaction of the authorities to the demands of the opposition - the resignation of the government, the abolition of the mixed election system, the recognition of Andriy Nastas by the mayor of Chisinau, and the cancellation of the tax reform, took place with a much smaller scale and controversial outcome.
So, instead of the announced 100-110, thousands of people took part in the protest on the side of the organizers much less protesters. In addition, the main platform for the protest rally was the Square of the Great National Assembly, which on the eve of the meeting failed to divide with the representatives of another opposition party - the Shore Party, which, as usual, is a partner of the ruling Democratic Party, Vlada Plakhotnyuk. As a result of the movement Acum could not use the platform in front of the parliament building, and it was impossible to occupy the territory around the monument to the Great Host of Moldova, Stefan the Great. As a result, the police, which ensured the order in the square of the Great National Assembly during the protests, estimated that the participation in the protest of the "Shore" Party took about 5 thousand people, and for the ACUM Movement action, 6,5 thousand people gathered.
In the future, everything looked like a real "sur".

Shore Party's demonstration turned out to be organized and prepared - a scene, microphones, a plan of action, the distribution of gifts, etc. At what she looked like a real picnic - with shish kebabs, singing and dancing. It's like celebrating Independence Day has already begun. Representatives of another pro-European opposition party, Maya Lagouti, who also applied for the square on this particular day, joined the participants of this action. Participants in the action, headed by mayor of Orhei, a businessman, Ilan Shore, who was sentenced by a court of first instance to seven years in prison for involvement in stealing billions of dollars from the banking system of Moldova, came to stand up for Shor's open stores and against right-wing leaders. the parties to which they attributed the "Action and Solidarity" and "Dignity and Justice" parties that tested them alongside.

In turn, the ACUM Movement focuses on the monument to Stefan the Great, located on the outskirts of the same square of the Great National Assembly in the center of the capital. However, as observers point out, this did not look like an organized event - either "improvised" scenes, or microphones (other than ordinary mobile phones), nor a scenario of an event and an ultimate goal. The slogans "Get down to power!", "Down with the dictatorship!", "The country belongs to the people, not to the oligarchs!", "The government to resign!" And so on.
In fact, everything looked like a cacophony. On the one hand, the slogans of some politicians and public activists were addressed to the authorities, on the other hand, slogans of other figures, but with slightly different content and direction, accompanied by dances, singing and kebabs. A simple man, seeing this action, most likely, will finally be disappointed with the politics of his country and the authorities in general.

Understanding the organizers of the protests of the ACUM movement decided to hold a march on the central street of the Moldovan capital to picket state institutions. However, it is not clear what purpose they wanted to achieve, because in connection with the Independence Day, the government made a decision even the next days - from 27 in August to 2 in September - to make a weekend for state employees. Passing along these institutions, the protesters returned to the monument to the Great Host of Moldova and the protest continued. Later a resolution was passed, which contained a requirement for the resignation of the government, the abolition of the mixed system of parliamentary elections and the prosecution of the perpetrators in stealing the banking bill.

In the evening, when both rallies began to descend, opposition party leaders, "Action and Solidarity" and "Dignity and Justice," urged their supporters to continue the rally night before the monument to Stefan the Great, so that in the morning 27 in August, on Independence Day Moldova, to meet the leadership of the country there and not allow the flowers to be placed on the monument. As a result, a small part of the protesters remained.
The following day, the demonstrators refused to disagree with the police request to leave the territory around the monument to Stefan the Great for official events. As a result, the special forces had to use force: people were taken from the square for hands and feet, several people said they were injured. After this, the square was surrounded by several police frontiers, so that the president of the Republic of Moldova I.Dodon, Prime Minister P.Filip and the Speaker of the Parliament A.Kanda were able to put flowers and leave immediately after shouting and shouting "shame!".

Summing up the circumstances
In fact, the protests of the pro-European opposition in Chisinau 26-27 in August did not work well, and as local analysts believed, they were more like a campaign, an action for action.
Nevertheless, whatever the positive goals pursued by the opposition in their protest, she made a number of mistakes, including lack of preparation for a rally, lack of a clear plan of action, lack of clear communication to their supporters regarding future steps to address the current political situation in the country, etc. . These are simple and complex things at the same time, but without them it is impossible to bunch around people and act effectively in the future. Everyone understands the problem perfectly, but wants to find a solution to it. This unfortunately was not noticeable.
Instead, the authorities in this situation looked much better than the opposition - allowing the rally, ensuring order and preventing provocations.

However, one should not assume that only the mistakes of the opposition led to the actual failure of the protest movement in late August. The background, which consisted in the information space in the pro-government media on the eve of the rallies, also did not contribute to the success of the upcoming campaign. So, on the eve was launched the theme of "threats of seizure of power", which, on the one hand, allowed the authorities to "look more closely at" the upcoming events on the square of the Great National Assembly, and on the other - to frighten a part of the population opposed to any force, especially remembering events in Chisinau 7 April 2009 year and on the square in Kiev at 2014.

In addition, the opposition leaders' positions were somewhat discredited by the circumstances surrounding the expulsion of EU / Ukrainian citizens / Lyudmila Kozlovskaya, the heads of the Polish Open Dialog Fundation Foundation on suspicion of espionage in favor of Moscow and the destabilization of the situation in the region. After all, they had contact with her. The Foundation provided them with visits to European countries for meetings with local politicians. And it does not matter that these contacts could be generally innocent. The widespread information about the connection of opposition leaders with allegedly Russian special services was, in essence, a compromising one.

That is, the protest movement was somewhat "set to take off", and finally "knocked down" 26 in August by a parallel rally of their opponents. All of this and added their own mistakes.
So far, the turbulent weekend in Chisinau, where de facto, can play in favor of the pro-Russian President of the Republic of Moldova I.Dodona. The Moldovan electorate, who still doubted whom to support him, could eventually decide. After all, against the backdrop of cacophony of slogans, statements and actions in the framework of recent protests, the clarity and certainty of the statements of the president, who, despite the past and the current possible connection with Vlad Plakhotnyuk, support a significant part of the population of the Republic of Moldova, is perceived as a "ray of light in the dark kingdom".

That is, today it can be stated that the situation in the Republic of Moldova on the eve of parliamentary elections is characterized by deepening of the political crisis and growing opposition between the authorities headed by the Democratic Party and its leader, Vlad Plakhotnyuk, and opposition parties, in particular, "Action and Solidarity", "Dignity and Justice" and Liberal -Democratic Party. The Socialist Party of the Republic of Moldova, the pro-Russian president, Igor Dodon, is in a public position to monitor the process, on the one hand declaring the need for the removal of the oligarchs from the authorities and, on the other, not taking more substantive actions to change the current situation in the country. Probably expecting favorable circumstances.

At the same time it can be stated that this is not the last escalation of political tension in the Republic of Moldova, since the parliamentary elections are not far off - in February 2019 year. And they promise to be hot enough. So far, according to the results of August, games for a victory in the upcoming "election Berlin" occur with some power over. However, over the next few months the situation may change. The actions of the official Chisinau in the context of the changes introduced in the electoral system, the introduction of tax reform, the lack of reaction to the calls of the opposition and much more, are already being negatively perceived in the EU. So, the European Union has already postponed the allocation of the first tranche of macro-financial assistance to Moldova due to the abolition of the results of the elections in Chisinau.

Zardusht Alizadeh: "On controllability, obedience and" one cage "for Azerbaijan and Armenia ..."

Key Challenges and Risks in Security and Defense: 2019 Year Results

Gela Vasadze: “As Georgia goes to NATO. History and Modernity »