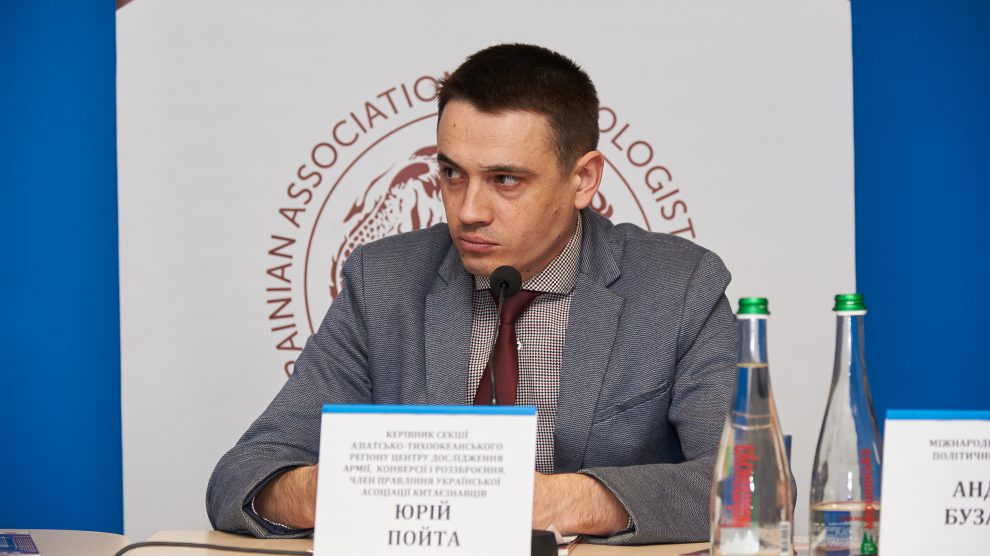 Ukraine's aspiration to become a member of the EU and NATO in no way interfere with the development of the MTC with China. This was stated by the head of the Asian-Pacific sector of the Center for the Study of Army, Conversion and Disarmament Yuri Poyt at a round table discussion on "Socialism with Chinese Specificity in a New Era: A View from Ukraine". During the event, organized by the Ukrainian Association of Sinologists, the ZDAKR expert spoke about the military reform of the People's Liberation Army of China (NWAC) and the capabilities of the PTS of Ukraine from the PRC.

Ukraine's aspiration to become a member of the EU and NATO in no way interfere with the development of the MTC with China. This was stated by the head of the Asian-Pacific sector of the Center for the Study of Army, Conversion and Disarmament Yuri Poyt at a round table discussion on "Socialism with Chinese Specificity in a New Era: A View from Ukraine". During the event, organized by the Ukrainian Association of Sinologists, the ZDAKR expert spoke about the military reform of the People's Liberation Army of China (NWAC) and the capabilities of the PTS of Ukraine from the PRC.

He noted that the topic of comprehensive modernization of the Chinese armed forces has become one of the key at the 19 Congress of the CCP. "If you analyze it report by PR China President Xi Jinping, the modernization of national defense is called a prerequisite for the implementation of the so-called "Chinese dream of a great revival of the Chinese nation." In other words, without a powerful army it is impossible to achieve those foreign-policy and internal political tasks, which the Chinese leaders have aimed at ", - said the expert.

He added that the Chinese remember very well the experience of the Opium wars in the century before, when, with the help of a modernized and modern fleet, the West conquered China, compelled to sign a series of unequal treaties, which became the beginning of the so-called "century of wars and humiliations", and almost did not set threatened by the existence of China as a nation and nation.

Continuing the theme of military reform, Poita added that Xi Jinping at the 19 Congress noted success in her conduct, and said that by the 2020 year, the army should be mechanized and informative and there should be a significant increase in its strategic potential. By 2035 of the year - most of the modernization of national defense and the army should be carried out, and up to 2050 year, "advanced world-class" armed forces should be created.

Chinese military reform - the transition from Soviet to Western model

According to the expert of the Central Research Laboratory, the essence of the military reform is as follows. Firstly, the structure of the armed forces has changed globally and a combat management system - instead of 7 military districts, 5 zones of combat command were created. A full reorganization of the command structure of the NWAC was carried out: instead of the four main departments (General Staff, Policies, Rear, and Arms), 15 specialized structures were created. It should be noted the creation of a completely new structure - the Joint Staff, whose main task is operational-strategic planning and joint management of troops. The Joint Headquarters is as much as possible exempted from the administrative, economic, logistical, educational and mobilization functions that were previously the prerogative of the General Staff of the NWAC.

"We are witnessing a transition from a centralized Soviet-style army management system to what the experts call" united Western-style command ", which will fundamentally change the structure of governance laid down in the 1930-years for a protracted continental war," said Poyt .

The second significant change is the transformation of the tasks of the armed forces. They began to focus on protecting China's national rights and interests in the oceans and operations abroad (fighting terrorism, protecting maritime communications, international peacekeeping actions, etc.). In this regard, we see a significant increase in the role of the Navy: aircraft carriers, corvettes, frigates (up to 18 vessels per year) are being constructed, overseas naval bases are being built (Djibouti WMD, Gwadar port in Pakistan, port in Sri Lanka). Also, the reduction of the land component at 300 thousand people and increased the number of naval forces, namely the Marine Corps, by 100 thousand people. In parallel, there was a reformation of the Airborne Troops, which are intended for offensive operations with long-range relocations. "We are seeing an increase in the expeditionary capabilities of China, which, according to the American model, should be prepared to perform tasks far from national territory, with logistics, logistics, navigation, etc., not only within the first and second island ranges, but also in the oceans. At the same time, the Chinese guiding documents (for example, the White Book "National Defense of China") deny the aspiration of the PRC to hegemony and expansion, promoting a very peaceful way of development ", - said the expert.

He added that the evidence suggests that the increase in China's economic and political influence in the world will be accompanied by an increase in the strength of the force, but the Chinese leadership speaks of peaceful development, the construction of a "community of common fate", therefore, according to some analysts, China should not be considered as a growing military threat. On the contrary, it is important to understand how to build a strategic partnership with China, which will help Ukraine to realize its national security interests.

In the opinion of the CSA expert, speaking about the PTS of Ukraine with China it is necessary to understand that the Ukrainian armed forces are also at the stage of reformation, and Ukraine's aspiration to become a member of the EU and NATO in no way interfere with the development of cooperation with the People's Republic of China in the field of defense. He added that because Ukraine does not possess the technology of production of combat aircraft (meaning a closed loop), this is the perspective: "We have production facilities that allow the production of military transport aircraft, and their TTX exceeds foreign analogues by many indicators, but in the field of fighter and assault aircraft we have a significant gap. " Among the promising directions is the joint creation on our territory of an aircraft based on the Chinese L-15 training aircraft, which houses Ukrainian engines of Motor Sich. The problem of assault and fighter aircraft of Ukraine is very acute, and procurement abroad is not possible at present (the Swedish Saab JAS 39 "Gripen" is not functional enough, and F-16 is very expensive in service). At the same time, Ukraine needs approximately 120 combat aircraft (the minimum figure is 60).

The expert at TsDAKR added that another important area of ​​cooperation may be the creation of a marine component of the Ukrainian Armed Forces. At the same time, it is necessary to focus on the creation of small high-speed sea platforms that the Ukrainian defense industry is able to produce, but for a very long time. We already have a cruise missile "Neptune" and with the presence of high-speed offshore platforms, Ukraine can actually build from the scratch of the Navy. "Such a strategy is included in the concept of the so-called" mosquito fleet "of a system of fast, maneuverable and unobtrusive boats that can operate in the near sea area, destroy surface ships and submarines of the enemy, protect important marine infrastructure, bases and ports, provide raids and special operations of the marines and forces of special operations, to carry out countermeasures ", - said the expert.

He added that an important aspect is the fact that modernization of the Ukrainian armed forces has already been allocated funds (for the procurement of weapons in 2018 year is about 16,5 billion UAH per year, with the defense budget 86,6 billion UAH). These 16,5 billion are just the size of the market, which, among other things, can be taken by Chinese companies.

At the same time, speaking about the steps to be taken by the Ukrainian political leadership, the CACARC expert noted that for the development of the necessary level of intergovernmental relations there should be a high level of contacts between the states. As an example, he gave the Belarusian Foreign Trade Union with China, as a result of which Minsk managed to solve one of the problems, namely, received rocket technology in the People's Republic of China. "As a result of joint co-operation, Belarusians created the Polonese with the Chinese Poles for two years, which with the new missile M20 actually became OTRK. Thus, Belarus decided to solve its national security problem - it created missile weapons, which Russia did not want to supply, "Poyta summed up.

He added that for further successful cooperation a detailed analysis of the bilateral relations in the field of military-technical cooperation between Ukraine and China is needed. Therefore, at the moment the CIDAR is considering the possibility of preparing a book on this topic (Previously, a book titled "UKRAINE-KITA: From Projects to Strategic Partnership" was published in 2009 year). In this regard, cooperation with the Chinese side would be very appropriate.